Posted by the scribe on December 7, 2013
Posted in: Arkham Horror. Leave a comment

The signs and portents and portents were all around us: Hastur, the King in Yellow—spawn of Yog-Sothoth,  half-brother of Cthulhu, and demon lord of unpredictable central heating systems—was stirring from his slumber.

A  heroic band of investigators sought to defeat the Evil before it could awake and devour all Arkham. There was Professor Harvey Walters, with his razor-sharp mind and talent for the magical; handyman Wilson Richards, with his handy shotgun and intermittent British accent; martial arts expert Lily Chen (who appeared to have no funny accents at all); and former soldier Mark Harrigan, still scarred by his experiences in France during the Great War to End All Wars.

Strange portals began to appear in the city, and from these mysterious gates emerged foul beasts and murderous creatures. At first the heroes struggled to close them, but the power of Hastur was such that only rarely could they manage to permanently seal these passages to the other planes. As panic began to grip the citizenry, Harrigan was deputized, and raced from street to street in his newly-obtained patrol car to confront the invaders with his beloved flame-thrower. The others gathered clues and items and prepared for the inevitable and even greater confrontation with the Evil beyond. Professor Walters was grievously wounded for a while, and forced to recuperate in Arkham Hospital. Lily Chen seems to take a remarkably long time to close a single gate. Wilson Richards continued to switch accents mid-sentence. 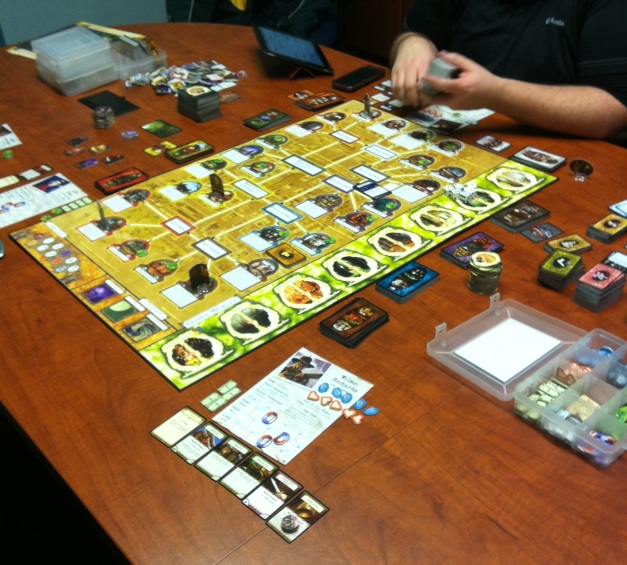 And so it was that Hastur awoke! The King in Yellow manifest himself in our place and time, in the heart of the city, his very being threatening the end of all civilization. Children wailed, and kittens climbed nearby trees in a most desperate fear.

But our heroes would triumph this day, in the final battle. (Quite easily actually—it must have been the pizza.)