Posted by the scribe on September 27, 2014
Posted in: Iraq RISK. Leave a comment

Recently the Shiite mainstream (ISCI), Sadrists, Sunni moderates, Sunni jihadists, and Kurds (PUK and KDP) sat down to once more rewrite the history of Iraq. This was the tenth anniversary of Iraqi RISK, which was first designed and played in 2004.

On this occasion, the ISCI prime minister soon alienated much of the National Assembly by retaining most of the cabinet seats and  transferring large amounts for state coffers to her own party. A vote of non-confidence followed, and a new Prime Minister—a Kurd from the PUK—was chosen. That administration didn’t last long either, due to an argument with the Sunni moderates that pushed them back into alliance with ISCI.

The jihadists, in the meantime, established a nation-wide protection racket of sorts, demanding payments from each player if they were to avoid attacks. ISCI paid up regularly. Others did not, and the jihadists found themselves in a series of skirmishes with the PUK and KDP. This, coupled with a confrontation between the Sunni moderates and the KDP, left pretty much all of northern and central Iraq only weakly held.

The Sadrists repeatedly warned that ISCI was developing a commanding lead, but to little avail. They finally launched a military campaign of their own against ISCI, but performed poorly. 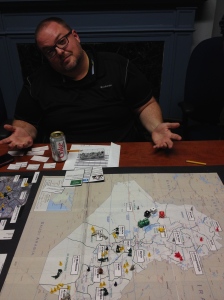 Throughout all of this, constitutional debates continued. The National Assembly decided that the new constitution would be based on the existing provincial boundaries, with a moderate decentralization of powers but a strong national army. All of this generated growing Sunni and Kurdish alienations, but increasingly it didn’t matter—squabbling among the smaller parties had left ISCI in a much stronger relative position. In a final offensive its militias overwhelmed the Sadrists in Karbala and Najaf,  conquered most of Baghdad, and pushed into Sunni and Kurdish areas too.

The game ended with an overwhelming ISCI victory.